The following are examples of organizations, causes or projects that we have supported over the years and that demonstrate our social commitment to our communities. 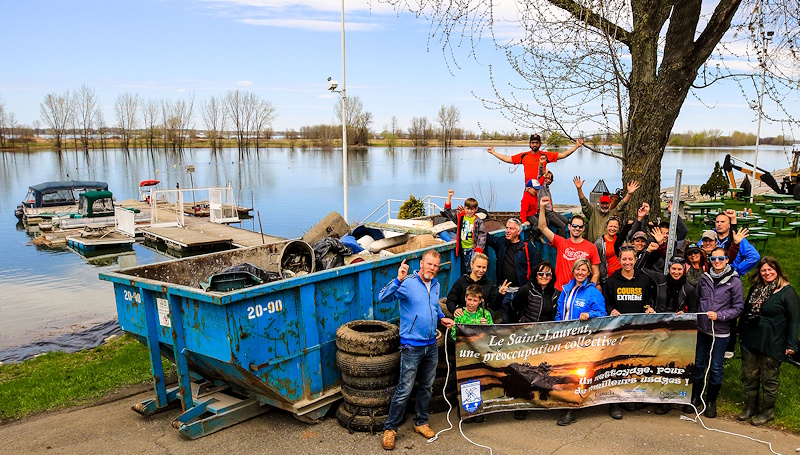 On May 12, 2018, in cooperation with the ZIP des Seigneuries, an area of prime concern, the City of Contrecoeur and GC-Aventure au fil de l’eau, a tour operator, the ArcelorMittal Long Products Canada environment department sponsored and organized a shoreline clean-up in Contrecoeur. Forty volunteers from the city and the surrounding area, including Mayor Maud Allaire, were taken by boat to the Contrecoeur wildlife reserve islands and to Dragon Island, owned by ArcelorMittal. A special permit was requested from Environment Canada because landing on these islands is ordinarily not allowed. Because of their location in the St.Lawrence River, these islands act as a giant filter, intercepting waste carried downstream by the current. By day’s end, our intrepid volunteers, exhausted but proud, had collected a total of 1,310 kg of waste of all kinds (examples include tires, Styrofoam and plastics). This volume of garbage will count towards the “10-ton mission”, a Facebook community that aims to remove 10 tonnes of waste from waterways in the summer of 2018.

Our sponsorship consisted in renting the container for safe disposal and handling of the waste collected. 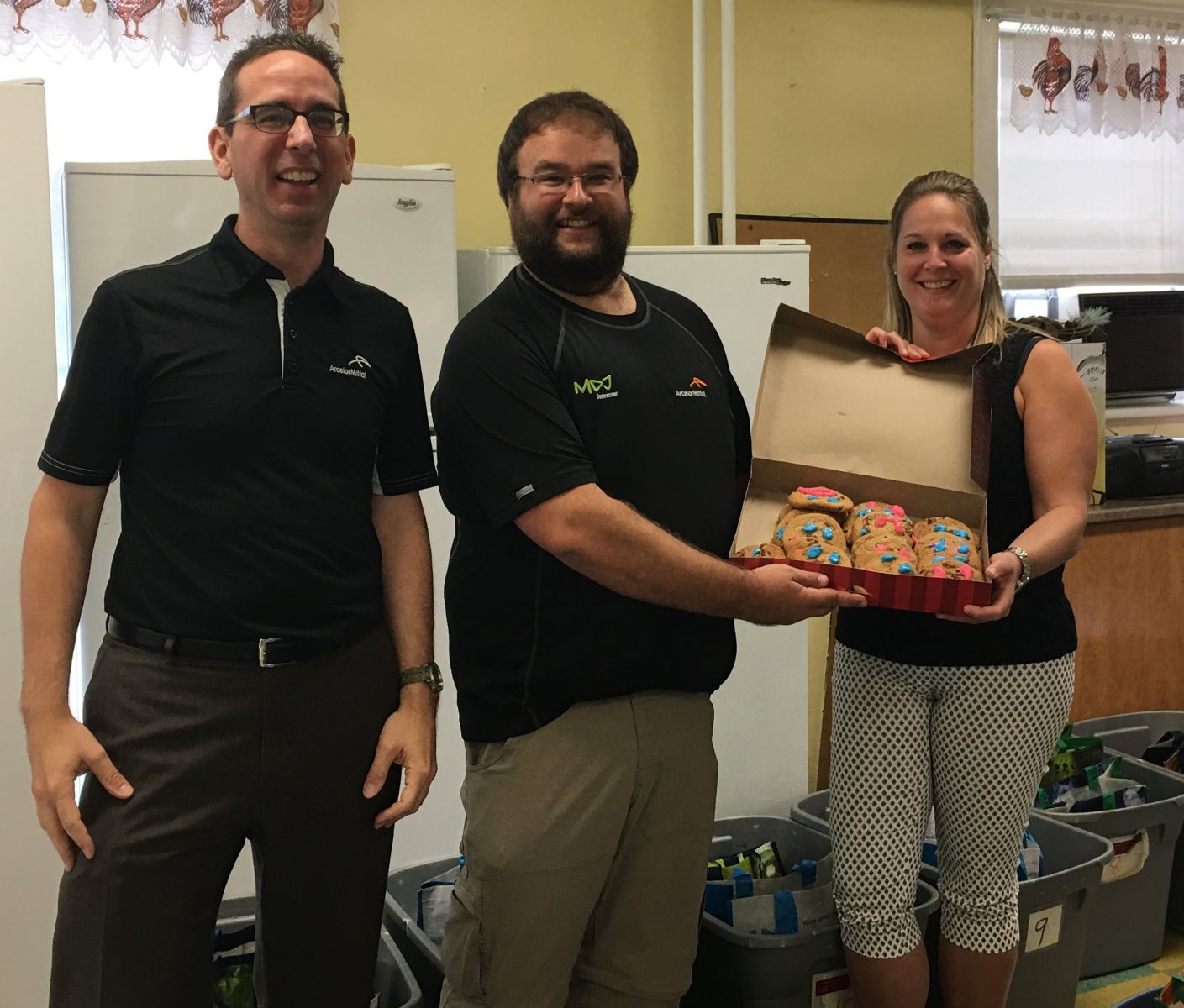 ArcelorMittal Long Products Canada decided to participate in the Tim Hortons Smile Cookie campaign in 2016 and 2017 by purchasing 20 dozen cookies at $1. The funds raised from the cookie sale, $240, were all donated to the Contrecoeur Maison des jeunes (youth centre), the regional beneficiary. Instead of keeping the cookies, ArcelorMittal chose to donate them to the Contrecoeur Volunteer Centre so they could be included in the food baskets distributed that week to poor families in Contrecoeur. Two good deeds at the same time! 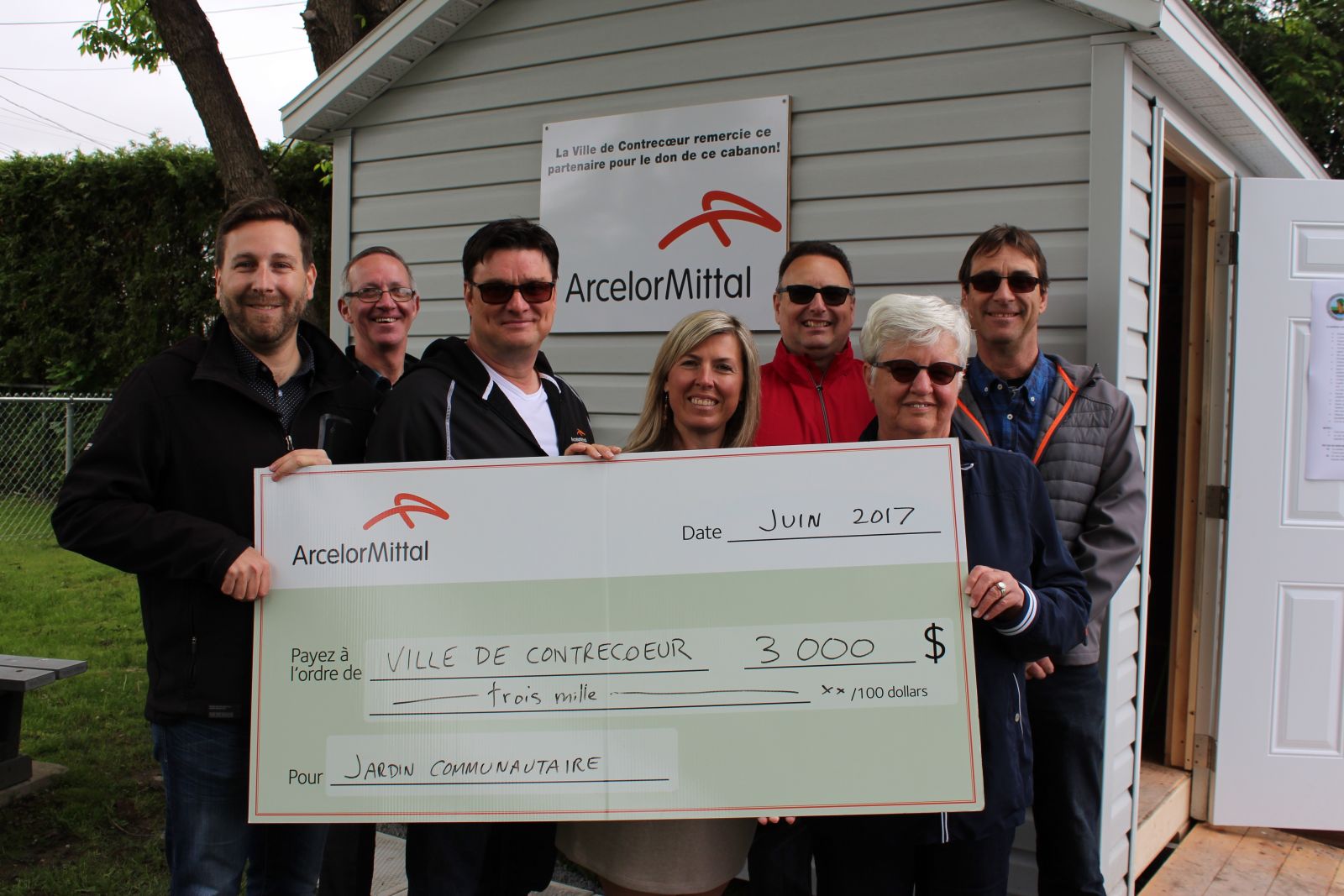 The City of Contrecoeur now boasts a community garden and ArcelorMittal contributed to its erection with a gift of $ 3,000 for the purchase of a shed. Amateur gardeners will be able to work efficiently and safely. OurGeneral Manager for the Contrecoeur-East Complex, Stéphane Brochu, was present at the inauguration to demonstrate our commitment to promoting a healthy environment in our host communities. 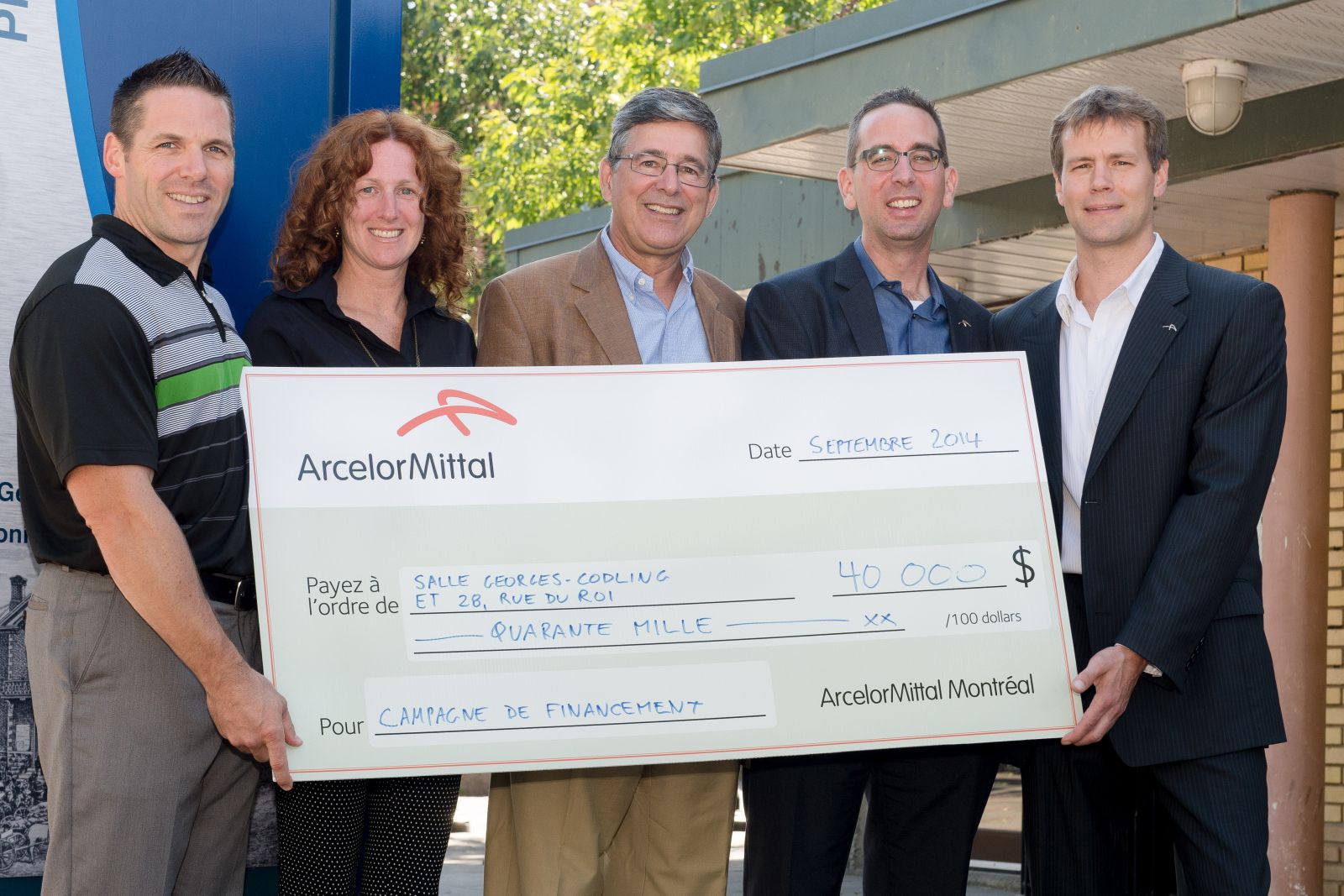 Our support for the fundraising campaign to renovate the Georges-Codling theatre and 28 Rue du Roi in Sorel-Tracy became official with a $40,000 contribution.

The 28 Rue du Roi, a historic, Art Deco-style building, needed to be renovated: the first objective was to upgrade the Georges-Codling theatre, a recognized venue for arts and entertainment. A new multi-use space was be created in the building and will be open to the public for community events. As part of the partnership, this space will be known as “Espace public ArcelorMittal” (ArcelorMittal Public Space) for 10 years.

ArcelorMittal Long Products Canada chose to support this multipurpose venue so that citizens would have a unique place to meet and hold community-engagement events. It will be a suitable location for entertainment, social and cultural events organized by and for various local organizations and the general public.

“This is another great contribution for us”, noted Sylvain Simard, chair of the 28 Rue du Roi fundraising campaign. “It shows that the project’s impact extends beyond the Sorel-Tracy limits. People in Contrecœur can also benefit from this restored building. And we know that many ArcelorMittal employees come from the Sorel-Tracy area, hence the company’s willingness to support this project that will provide a stimulating living environment for its employees.” 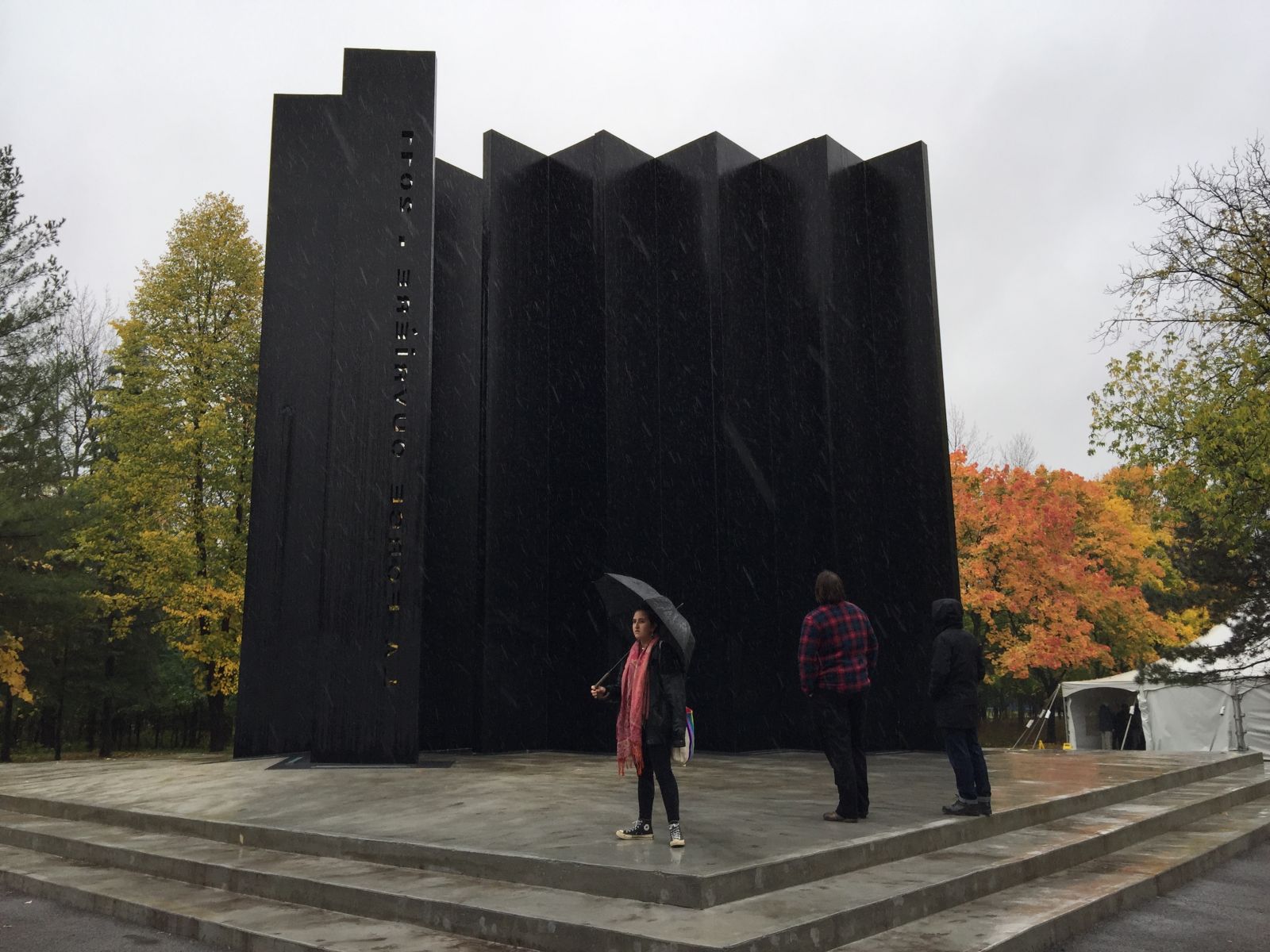 To pay tribute to union leader Michel Chartrand, the city of Longueuil commissioned an immense sculpture from an internationally renowned artist, Armand Vaillancourt. This work of art, called “La force ouvrière” (The Workers’ Strength), is installed in the Parc régional de Longueuil, now renamed Parc Michel-Chartrand. Mr. Chartrand lived in Longueuil for much of his life.

The sculpture represents the strong union movement as well as the pooling of resources and workers. It is made of 500 tonnes of steel (20 huge plates) that ArcelorMittal Long Products Canada accepted to provide to Mr. Vaillancourt. Given ArcelorMittal’s presence in Longueuil and the significance of this artwork throughout Quebec, we were pleased to have been chosen to contribute to Armand Vaillancourt’s project and to join with those who want to celebrate the career of Michel Chartrand. An advocate for social justice in Quebec, Mr. Chartrand was President of the Montreal Central Council of the Confédération des syndicats nationaux (CSN) union. 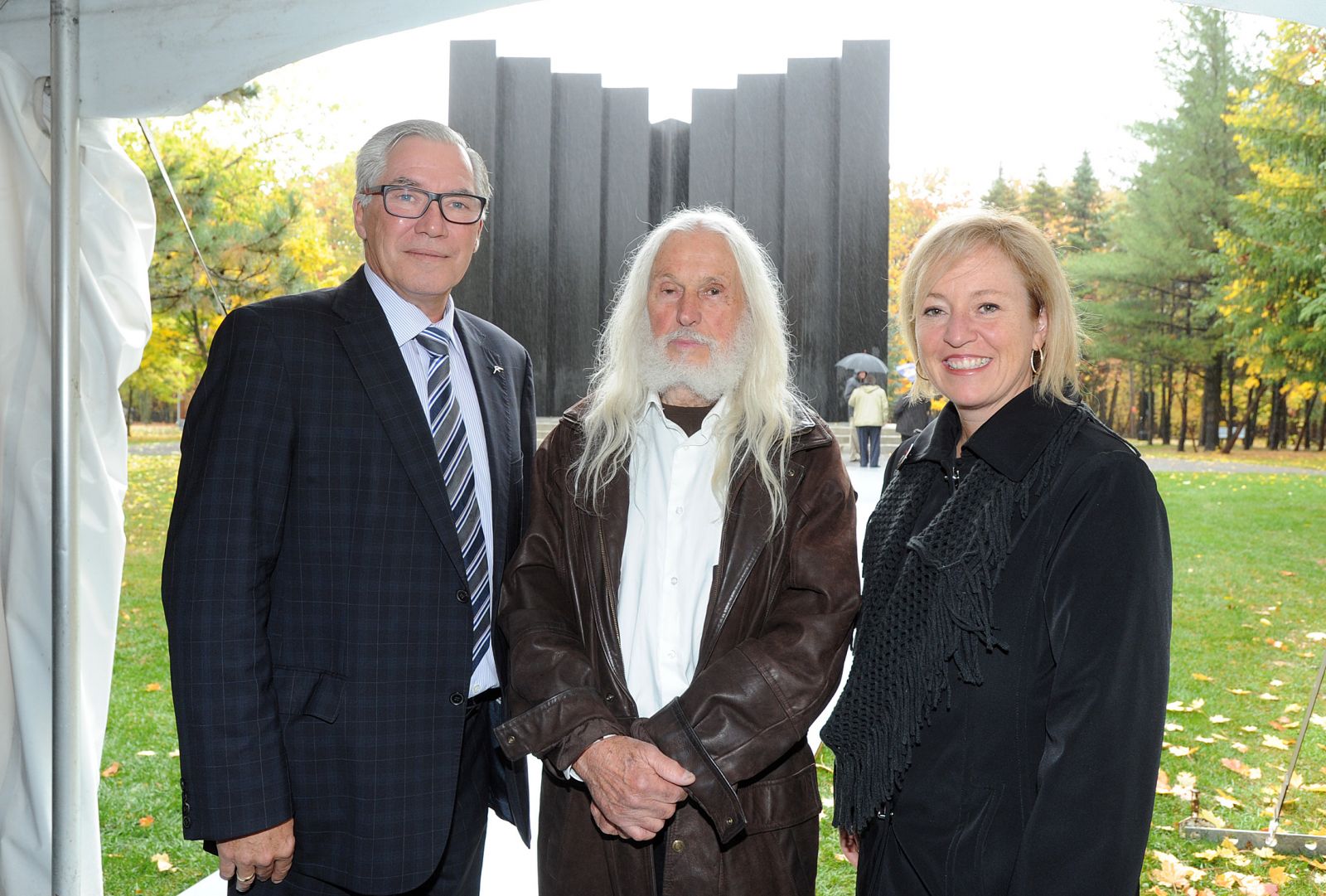 Left to right, standing in front of the sculpture in Michel-Chartrand Park when it was unveiled in the fall of 2016: Geoffrey R. Inniss, then Chief Marketing Officer, ArcelorMittal Long Products Canada; Armand Vaillancourt, sculptor and designer of La force ouvrière (The Workers’ Strength); Caroline St-Hilaire, Mayor of Longueuil in 2016. 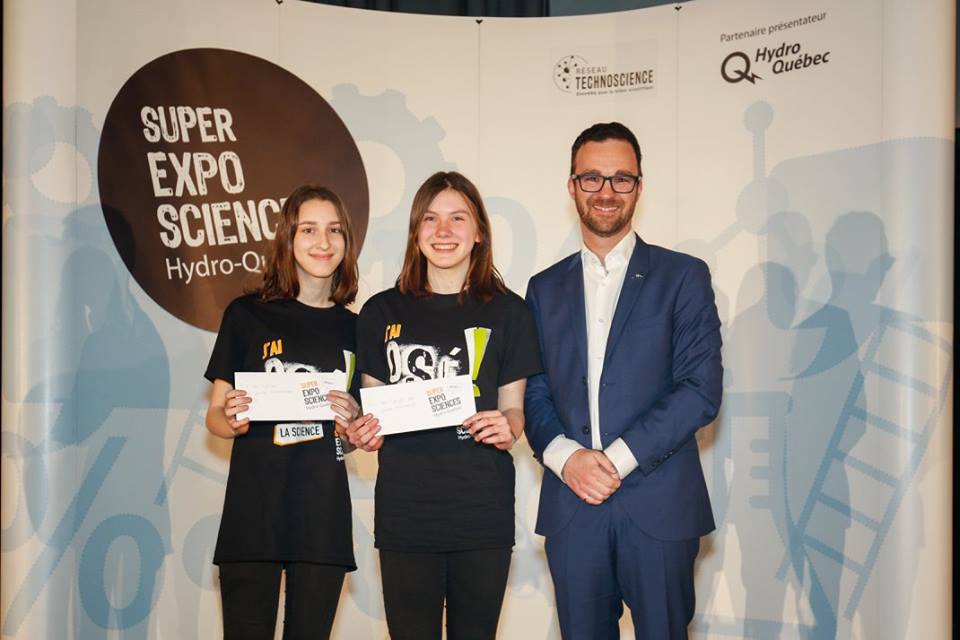 ArcelorMittal was an Elite sponsor of the 2017 provincial final of Exposciences, the largest science fair in Quebec where the best 125 scientific projects of the year were in competition. After taking part in local and regional finals in the previous months, youngsters aged 6 to 20 were reunited in the St-Hubert borough of the City of Longueuil, on Montreal’s South Shore, from April 20 to 23. On display were their experimentation, design or study projects in one of the seven specific scientific fields of the contest. As the activity was taking place this year in Longueuil, one of ArcelorMittal Long Products Canada’s host communities, we decided to jump in as a sponsor, like we did last year when the provincial final was in Sorel-Tracy, next to our Contrecoeur location. Philippe Boulanger, General Manager of the Contrecoeur-West and Longueuil complexes, acted as the “scientific chair” of the event for the weekend. On top of speaking at the press conference and meeting the exhibitors over the weekend, Philippe (pictured above with two of the winners) distributed some of the prizes to the best teams during the closing ceremony. “It’s a great honor for me to be alongside these youngsters in this great adventure that’s Expo-sciences,” said Philippe

More than 15,000 young people take part each year in a local or regional final or in the Québec Final of Exposciences. We are proud to support their mission and contribute to STEM education with youngsters, in line with ArcelorMittal’s desired outcome of creating a pipeline of talented scientists and engineers for tomorrow. 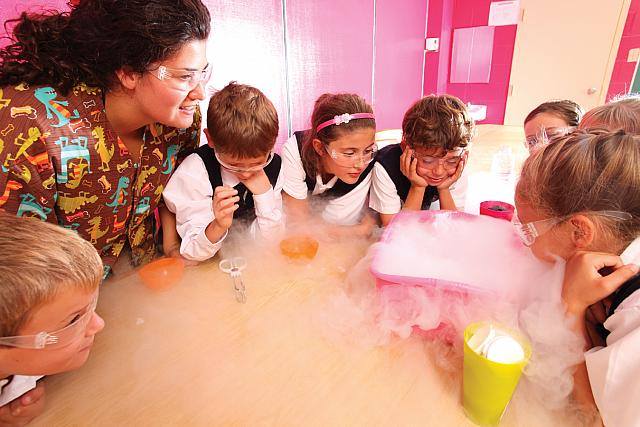 Long Products Canada also contributed funding to the Animations Scientifiques Prof. Dino organization in Longueuil (Québec). This partnership will give hundreds of elementary school children in Longueuil and throughout Quebec—some in underprivileged areas—access to exciting interactive classroom workshops and adapted teaching materials. The educational workshops by Animations Scientifiques Prof. Dino awaken children’s awareness of science through hands-on learning, boost self-esteem, and foster students’ interest in studying science. These workshops reinforce the concepts taught in the elementary school curriculum with experiments in electricity, weather phenomena, experiences with animals, etc. Although these workshops are available for a fee to any school that requests them, Animations Scientifiques Prof. Dino often goes to schools in economically depressed areas or to special-education classes. Given these schools’ limited budgets, donations from partners like ArcelorMittal mean that the workshops can be provided to these classes free of charge.

60 Minutes to Fight Hunger in the Hamilton Area 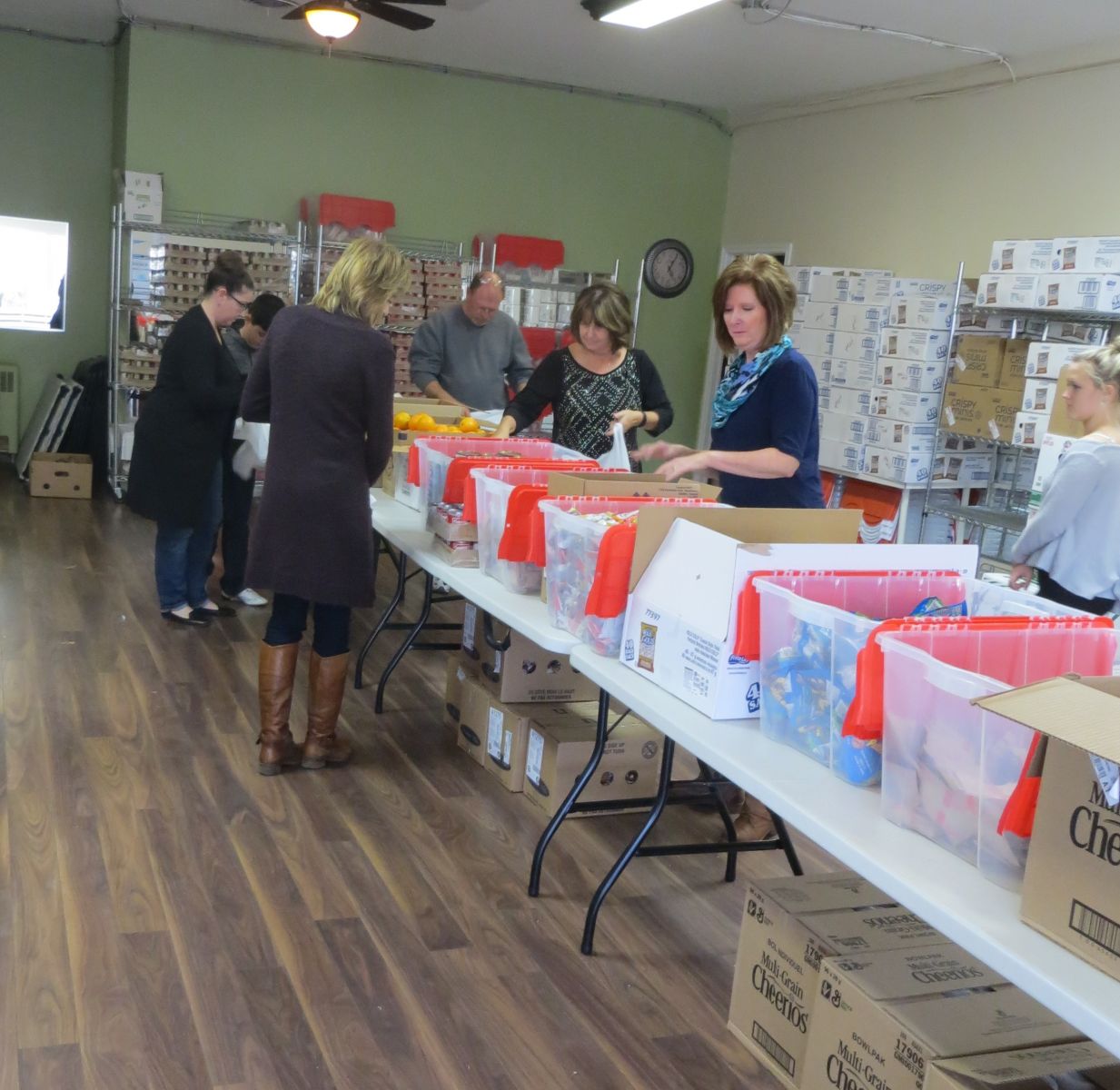 Food4Kids is an organization in the Hamilton region which provides packages of healthy food for children aged 5-14 years who currently have limited or no access to food each weekend. Currently, there are approximately 1,200 children in the Hamilton & Halton regions sustaining each and every weekend without food. Food items are packed by Food4Kids volunteers and delivered to schools each Friday morning. Once at the child’s school, the food package is discretely placed into the student’s own backpack, helping to shield the child from any stigma that may be associated with hunger or receiving food assistance. It is important to note that in households with multiple children, each child receives their own package of food. The Food4Kids program is entirely funded by community donors and one-time grants.

As a sponsor of Food4Kids, the employees of ArcelorMittal Hamilton-East were invited to participate in a “Pack Night”. A group of volunteers from Hamilton-East met at the Food4Kids facility, where in just over an hour’s time, they packed 900 bags of healthy food for children attending 35 different schools across the Hamilton region. 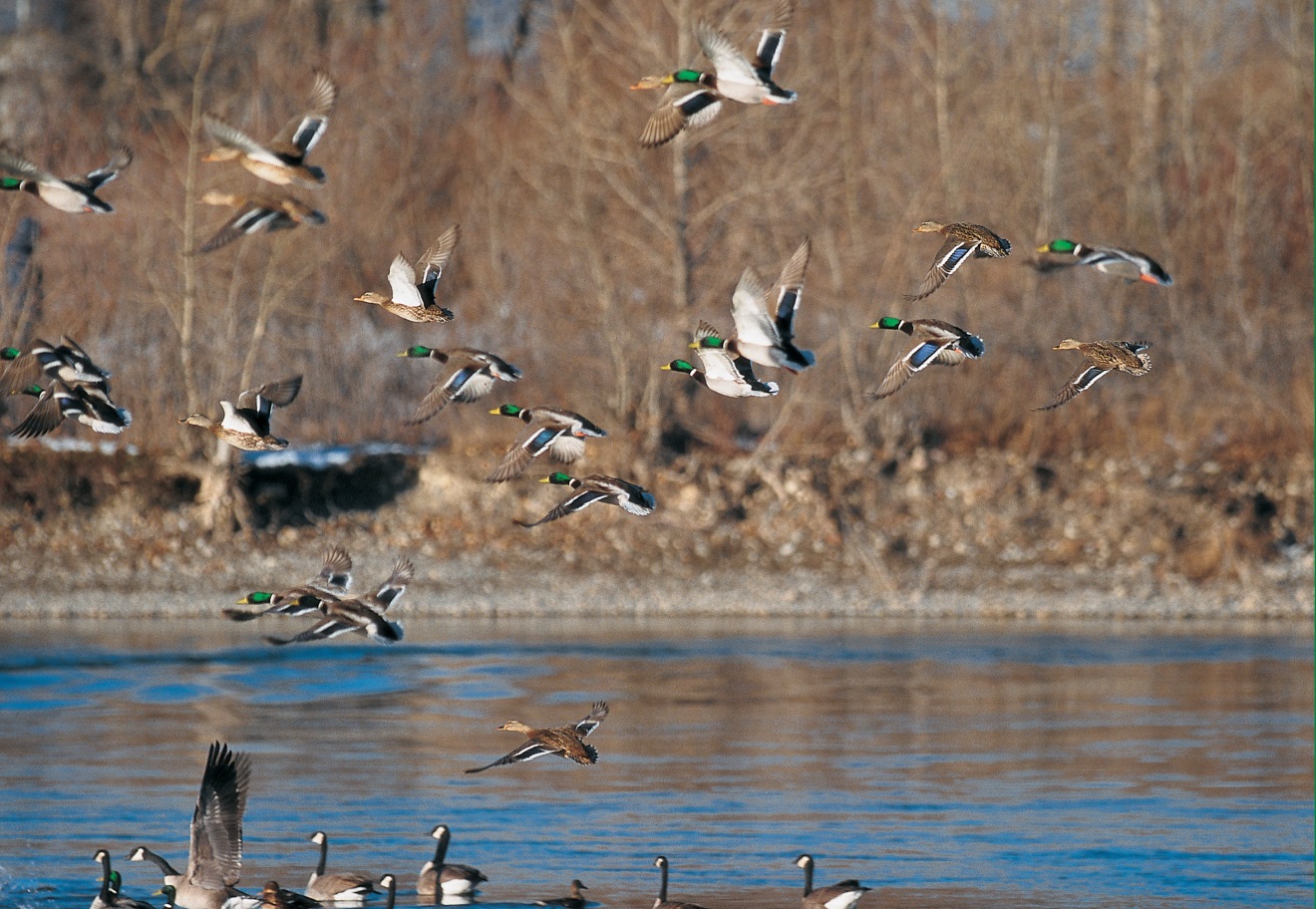 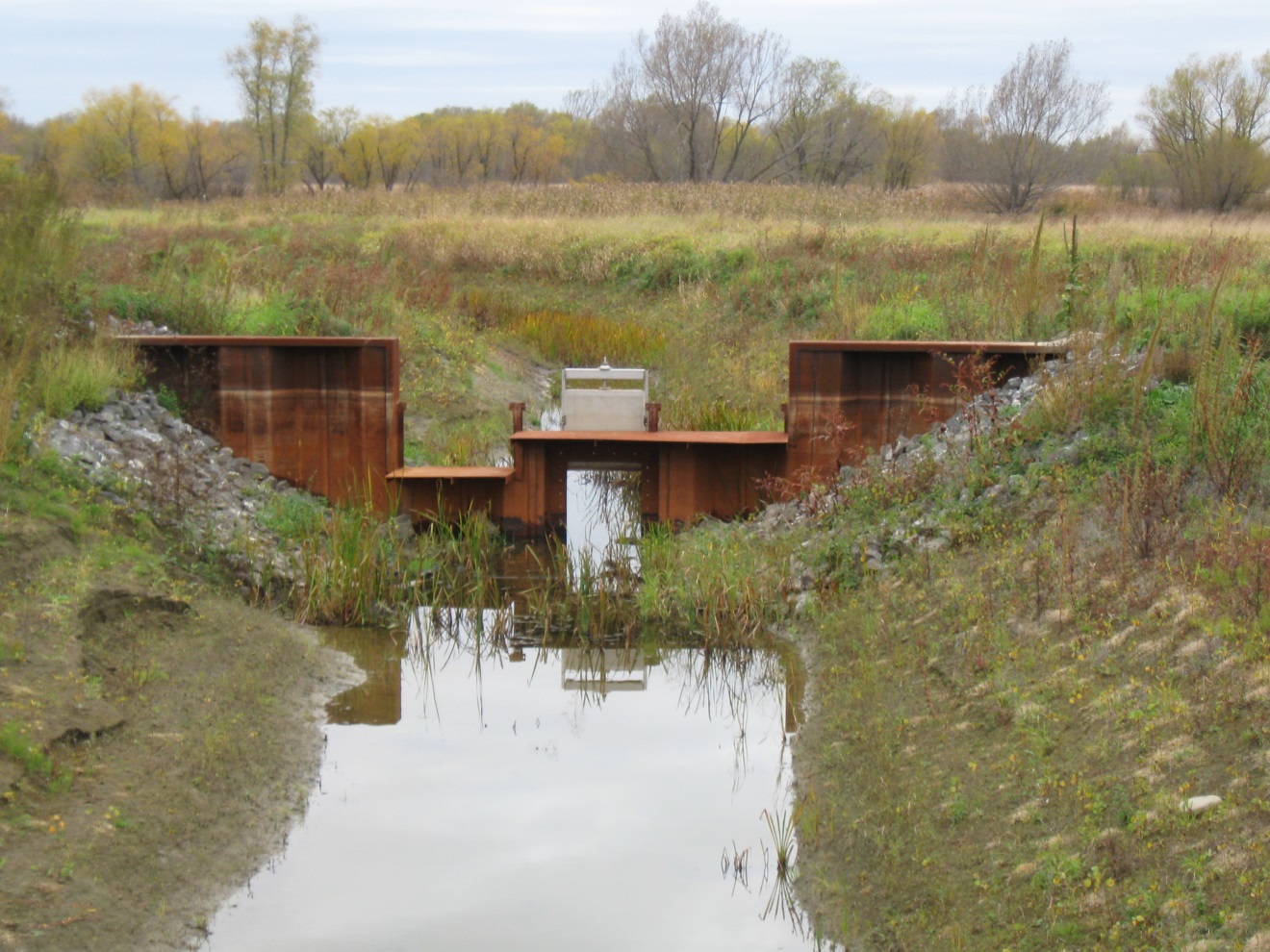 Eastern Montérégie, where ArcelorMittal Long Products Canada has a number of facilities, is a cradle of the metals industry. Direct access to the St. Lawrence River is a major asset for transporting our raw materials. In return, we have to play an active part in long-term protection of this environment, which is home to a wide range of plant and animal species.

In 2012, we announced a financial partnership with Ducks Unlimited Canada to help preserve Lavallière Bay, the largest developed wetland in Quebec. Restoration of the marsh involved building a water-level control structure, dikes and a pumping station.

This work was done to provide the optimal breeding habitats that are essential for many marsh species, including ducks and yellow perch. Over the years, various disturbances have affected Lavallière Bay. A reduction in its wildlife potential and general deterioration of habitat were observed, particularly the area of open water still available for wildlife. The ultimate objective of Ducks Unlimited Canada and its partners is to restore a permanent marsh within Lavallière Bay (St. Louis Marsh), an area of about 117 hectares.

This project was made possible with our financial support and that of other partners, including the Fondation de la faune du Québec, Wildlife Habitat Canada, the Québec government and Fisheries and Oceans Canada. The Ducks Unlimited Canada initiatives have already produced positive results for habitat and hunting in the area. We will continue to see the benefits of these projects in the coming years. 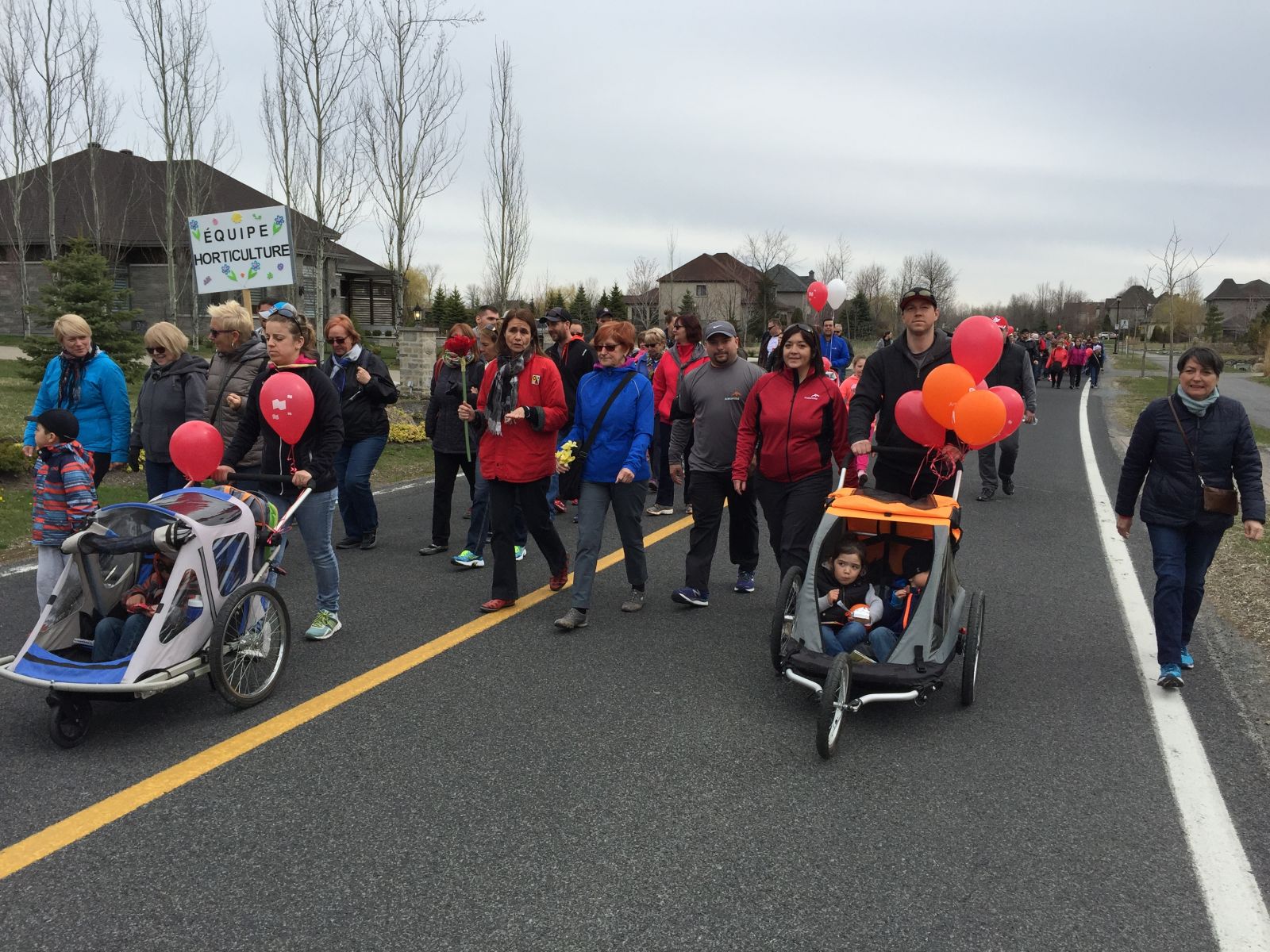 ArcelorMittal supports each year the Maison Source Bleue palliative care facility in Boucherville by helping to raise funds to support the hospice’s mission. In addition to participating in the annual walk, the company donates $10,000 annually. ArcelorMittal employees and their family members stroll the 5-km route with other participants from the community. Since it opened in 2011, the Maison Source Bleue palliative care facility has offered a range of end-of-life care and services free of charge to adults. Source Bleue has a team of 7 doctors, 60 employees and 160 volunteers. On a typical year, more than 200 patients and their families benefit from this extension of their home.